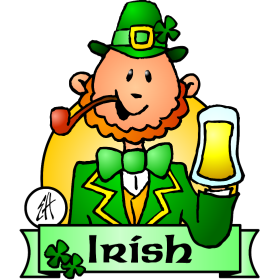 A Muslim was sitting next to Paddy on a plane. Paddy ordered a whisky. The stewardess asked the Muslim if he’d like a drink. He replied in disgust, “I’d rather be raped by a dozen whores than let liquor touch my lips!” Paddy handed his drink back and said, “Me too, I didn’t know we had a choice!”

Paddy calls Easyjet to book a flight. The operator asks, “How many people are flying with you?” Paddy replies, “I don’t know! It’s your bloody plane!”

Paddy and Murphy are working on a building site. Paddy says to Murphy, “I’m gonna have the day off. I’m gonna pretend I’m mad!” He climbs up the rafters, hangs upside down and shouts, “I’M A LIGHT BULB! I’M A LIGHT BULB!” Murphy watches in amazement! The Foreman shouts, “Paddy you’re mad, go home” So he leaves the site. Murphy starts packing his kit up to leave as well. “Where the hell are you going?” asks the Foreman. “I can’t work in the friggin’ dark!” says Murphy.

Paddy takes his new wife to bed on their wedding night. She undresses, lies on the bed spread-eagled and says, “You know what I want, don’t you?” “Yeah,” says Paddy. “The whole ‘friggin’ bed by the looks of it!”

Paddy, the electrician, got sacked from the U.S. prison service for not servicing the electric chair. He said in his professional opinion it was a death trap!

Paddy is said to be shocked at finding out all his cows have Bluetongue. “Be Jeysus!” he said, “I didn’t even know they had mobile phones!”

Mick and Paddy are reading head stones at a nearby cemetery. Mick says “Crikey! There’s a bloke here who was 152!” Paddy says “What’s his name?” Mick replies “Miles, from London!”

Paddy had long heard the stories of an amazing family tradition. It appeared that his father, grandfather and great-grandfather had all been able to walk on water on their 18th birthday. On that special day, they’d each walked across the lake to the pub on the far side for their first legal drink. So when Paddy’s 18th birthday came ’round, he and his pal Mick, took a boat out to the middle of the lake, Paddy, stepped out of the boat and nearly drowned! Mick just barely managed to pull him to safety. Furious and confused, Paddy, went to see his grandmother. ‘Grandma,’ he asked, “It’s my 18th birthday, so why can’t I walk ‘cross the lake like my father, his father, and his father before him?” Granny looked deeply into Paddy’s, troubled brown eyes and said, “Because your father, your grandfather and your great grandfather were all born in December, when the lake is frozen, and you were born in August, ya dip shit”.