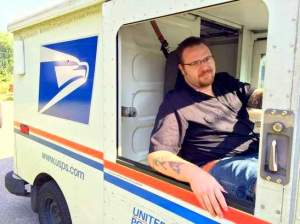 One Monday morning, Shane the mailman was riding through the neighborhood on his usual route, delivering the mail. As he approached one of the homes he noticed that both cars were still in the driveway.

His wonder was cut short by David, the homeowner, coming out with a load of empty beer, wine and spirit bottles for the recycling bin.

“Wow David looks like you guys had one hell of a party last night,” Shane commented.

David, in obvious pain, replied, “Actually we had it Saturday night. This is the first time I have felt like moving since 4:00 o’clock Sunday morning. We had about 15 couples from around the neighbourhood over for some weekend fun and it got a bit wild. We all got so drunk around midnight that we started playing WHO AM I?”

Shane thought for a moment and said, “How do you play WHO AM I?”

“Well, all the guys go in the bedroom and come out one at a time covered with a sheet with only the family jewels’ showing through a hole in the sheet. Then the women try to guess who it is.”

The mailman laughed and said, “Sounds like fun, I’m sorry I missed it.”

“Probably a good thing you did,” David responded, “Your name came up 7 times.”